The morning following our 22-mile (35km) day of hiking we awoke to a gentle tapping on our tent, which meant rain. That sound immediately deflated my ambition and I think that Ian and I both strongly considered just having a down day. A day filled with lounging in the tent playing cards and reading books while having one cup of hot cocoa after the next; what an amazing prospect! So, of course, we got up and kept hiking because we are gluttons for punishment. This was a big day of hiking for us (since the day before was so mellow?) because we were hiking up and over the John Gardener mountain pass.

By the time we broke down camp the rain had subsided to a light drizzle and it was time to start putting one foot in front of the other again. We had officially passed the end of the “W” circuit so there were much fewer people on the trail, which I must say was quite a nice change. The views were nothing less than incredible with Glacier Grey off to our left stretching on seemingly forever. I mean seriously, I’m starting to wonder how much natural beauty one can withstand before your retinas explode due to breathtaking view overload or something. 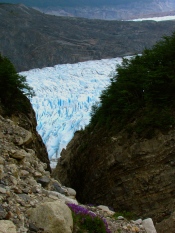 At one point we had a fun surprise when we learned that we’d be ascending/descending long ladders along the trail, making for a fun little adventure before stopping off for lunch at Paso Campamento. While at Paso we chatted with some folks coming from the other direction who were completely destroyed from hiking down off the pass and were taking the rest of the day to relax their legs. I was pretty surprised because it was so early and it made me think perhaps we were in for a bigger day than what I had previously envisioned.

As we pushed past Paso Campamento the direction we seemed to be heading was up. Once the trail started going upward it stayed that way for a very, very, long time; but at least it was steep. I kept thinking back to those hikers we had passed thinking, “No wonder their legs were destroyed! This would be awful to hike down.” I had no idea what was in store for our descent off the pass on the other side but I was really hoping it wouldn’t be as steep as the section that we were ascending.

The rain had picked up again at some point but we were mostly covered by tree canopy until we neared the top of the pass which left us completely exposed. We had a great view of Glacier Grey once again but a storm cell was closing in on us so the view was quickly disappearing into a hazy cloud of rain, sleet and hail, yes hail. But at least it was windy. 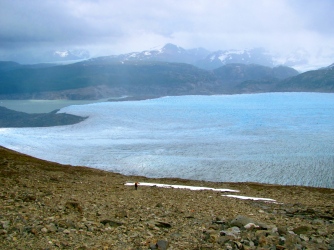 As I finally crested the top of the pass I began feeling the swell of victory that comes when you’ve done something you deem to be of relative difficulty. I had already planned my victory party, which was going to consist of throwing my pack off, sitting down, and eating a toffee as I gazed down at where I had just hiked from; it was going to be glorious and it was going to last at least 15 minutes.

Just then, as I triumphantly plopped my haggard body down onto the shale rock Ian gave me the look. The, you must be kidding me, there is a huge storm cell closing in on us and we need to keep moving, look. It was one of those moments when I knew he was right but I really, really wished that he wasn’t right so that I could enjoy my victory party. And just like that, I was up on my feet again; hello pack, I missed you.

Proof that I sat down 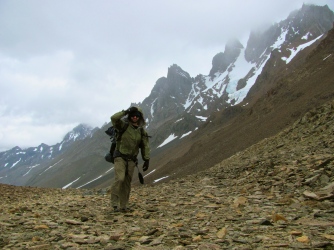 Down we went. Down through the snowfields and over the slick and slippery shale rock woefully exposed to all of the aforementioned weather embellishments. Once we picked our way through the slippery rock section we graduated to the muddy trail section. It was muddy enough that there was a real concern of losing a shoe to the suction cup effect. Some might call this stretch of hiking on this day, during this weather, adventurous.

I was feeling so adventurous that when I finally got an opportunity to sit down in an exposure and mud-free location I took it. I sat down like I was playing musical chairs in kindergarten, quickly and before someone (Ian) took away my opportunity. There is a special sort of strain involved with trying not to fall on slippery rocks when wearing a heavy pack and I was ready for a break.

I was certain that I was in for at least a few more hours of adventure and if that was the case I needed to recharge with an all-curing chewy toffee in order to push on. I took tiny nibbles savoring each bite until it was gone, then I begrudgingly accepted my fate and we continued onward. About 15 minutes after that moment we were given an excellent surprise when we stumbled into Los Perros Campamento! It felt akin to winning the backpacker’s lottery or something. We quickly set-up the tent to have a dry refuge, solidifying that our time spent enduring the elements was over for the day.

The campamento was small but it had everything we needed, including a shelter. It was rustic to say the least, as it was fashioned together by tree limbs and plastic tarps but it was basically the Ritz Carlton in my mind. It provided shelter from the wind and it had a wood stove so it was warm as well; what else could you ask for? 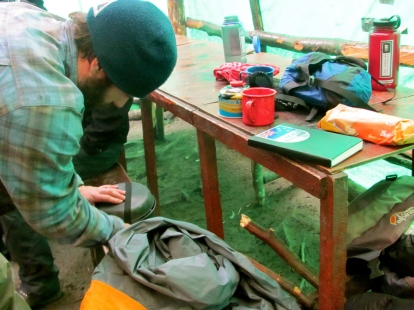 We decided to have our meals in the shelter, which was packed with other folks who were all trying to get their grub in order as well. Ian and I sat next to a couple and their guide who were all enjoying a lavish meal that I refrained from yanking out of their hands, oh the restraint! It’s one of my least favorite things to be hungry and be forced to ration. The guide offered Ian and I cookies and fruit cocktail, which we politely hesitated accepting so as not to look like feral dogs at a trash can. A dry place out of the wind to eat dinner and bonus food; could this day get any better?

That evening we were lulled to sleep by the constant tapping of rain on our tent and awoke to find a fresh blanket of snow. SNOW.

The real downside to this situation was that our tent was wet and putting away a wet tent only leads to misery the following night so we opted for attempting to hang dry it in the shelter whilst we made ourselves breakfast. That plan proved pretty successful and despite the adverse weather we decided to keep moving rather than stay put. After all, we were hiking away from the pass where the worst of the weather was. Most everyone heading the other direction (over the pass) was waiting it out.

Our hike to Refugio Dickson was a bit wet but the hiking was easy and we were mostly protected from the rain by the canopy of a lush green forest; all in all, it was a pretty good day. Dickson was a peaceful place to camp with a nearby lake where Ian could practice his rock-skipping skill set, what a bonus! 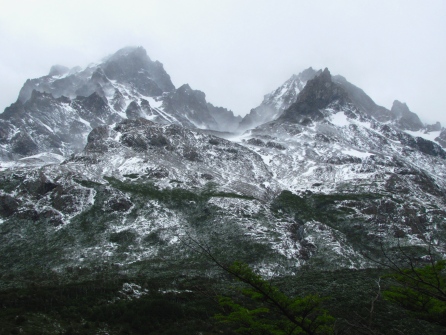 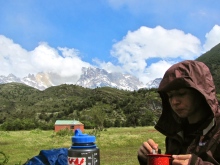 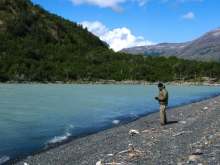 The following morning had us heading for Campamento Seron, our last stop before finishing the circuit. The hiking was flat for a long stretch between Dickson and Seron before making a long gradual ascent. I was beginning to realize that all the arduous hiking was behind us and it was smooth sailing from here on out. 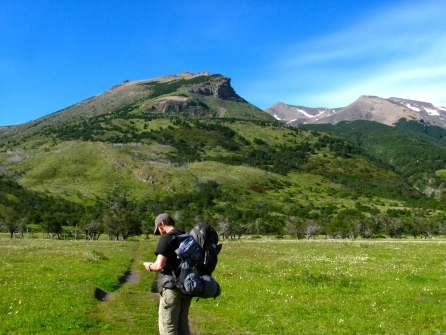 It should be stated that Ian and I did the circuit backward from what is recommended and I couldn’t be happier that we went the direction we did! I’m glad I got all the tougher hiking out of the way with fresh legs and I’m especially thankful that I didn’t have to hike down that steep pitch off the pass. Our only contender now was the wind but fortunately, it was blowing at our backs so it was actually helping us along.

Yes, it was all looking like ice cream and rainbows until we took a quick rest and I learned that we were down to our last toffees! We still had a day of hiking left; how does one find the motivation to put on a heavy pack, (which chaffs the hips and accosts the shoulders) while also enduring the battling wind without toffees? It’s barbaric!

We settled ourselves in Campamento Seron. A pleasant little spot with the exception of our friend the wind, which had laid our tent out flat several times after we had set it up. We had plenty of lounging time at Seron giving us the ability to read books and relax, but mostly we fantasized about food. Our rations were dwindling and food was going to be pretty skimpy until we made it back to Puerto Natales.

The next day we hiked a stretch of around 7 miles, (which would be one of our shortest hiking days) in order to make it back to the gate of the park where we could catch a bus into Puerto Natales. We arrived at the park entrance (after crossing yet another dodgy bridge) with time to kill before the bus arrived; luckily there was live entertainment. Two guanacos were fighting and chasing after one another for what ended up being 2 hours all said and done. Ian was convinced they were fighting over a female and we both assumed them to be males. I found it funny neither of us entertained the concept that two females would fight and chase after one another for 2 hours, looking completely ridiculous. I much appreciated the distraction because it kept my mind off of obsessing over food, of which we now had none. 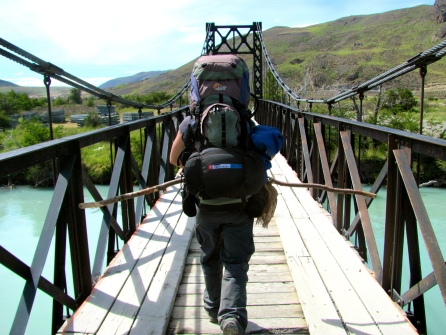 Finishing the circuit through Torres Del Paine National Park ended up taking us 6 days of hiking, which is definitely condensed in regards to the recommendation of completing the circuit in 8-10 days but all that really means is that we had no “light” hiking days, which my legs can attest to.

Even with the incessant wind and the quickly shifting weather, this trek is more than worth it. In fact, it has earned a spot on my short list of the most incredible places on planet earth. It’s a pretty great way to start our time in South America but it also sets the bar really high for the rest of the trip. Next stop, (after gluttonous amounts of food, a restocking of toffees and a couple of rest days in Puerto Natales) Argentina.

"The never ending search of a parent" Hint: It's in the Trials of Parenting section.