My first season on a Hotshot Crew was tough.

I felt like I was strivin’ for survivin’ in those first weeks. I showed up with some type II handcrew and engine experience but even still it felt like a big leap to the type I world. Our PT’s were intense, the fitness level was high, the learning curve was steep and it seemed like everything we did was happening at lightning speed. Crewmembers fought each other over extra duties so you had to find ways to make your individual contribution to the crew. I was amazed at the demeanor of the returning crewmembers; they made everything seem so easy while I felt like I was fighting to stay afloat. All I could do was put in every ounce of effort I had and hope for the best.

Every time  you transition to a new crew in fire you’ve got to prove yourself no matter who you are, or what level you’re coming in at. It doesn’t matter if you’re the rookie GS-3 or the  new Superintendent. This truth is one of those constants within our culture that withstands the test of time and evolution. If fire culture were to sustain a nuclear blast, this truth is the cockroach that would survive to live another day.

This crew was no different and I certainly picked up on the cold/aloofness of many crewmembers as we went through our 2-weeks of critical training. They were waiting for me to either prove myself or fail. Every time we drove anywhere I was reminded of this as I looked up at a laminated sign in the back of the carrier which read, “Respect ain’t a gift; you’ve got to earn it!”

Time went on and we finally finished our critical training. It felt like some of the crewmembers began to ease up on me while I could tell others were waiting for us to get out on some fires together first. When you’re the new person having to prove yourself you can always feel the undercurrent; the general sensation that people are watching and judging you at all times. It makes even the smallest mistake feel amplified. There’s just no telling what it will take to finally prove yourself and gain acceptance, sometimes it ends up being the strangest of circumstances. I’d say the turning point for me certainly fit into the strange category.

We had gotten called to a fire on an adjacent forest and upon arrival we staged at the district for a couple of hours. Crewmembers were sticking close to the rigs but everyone was hanging out doing their own thing. Eventually a good portion of the crew was circled-up outside the back of the rigs just shooting the sh#t like fire folks do. I popped out of the carrier to head toward the building with my recycling (yes, I am an avid recycler) when one of the guys (nicknamed Chubbs) who was circled-up gave me some good old-fashioned big brother pestering. As I walked past he pulled my beanie hat over my eyes and pushed me up against the side of the carrier.

I could hear all the commotion and laughing from everyone who was circled up including the guy who was giving me a hard time. I have 3 brothers so I responded the same way I would have with any of them. I tucked my leg around the back of his feet, felt for his chest (my hat was still over my eyes) and pushed him down while I gave him a leg-sweep at the same time.

He landed flat on his back and I pulled my hat up giving him a “that’s what you get” look. I picked up all my recycling and went about my business. I could hear a roar of laughter as I kept walking and all the sudden I thought, “Oh sh#t. I might have really screwed up. What if I just made an enemy?” I felt the sense of impending doom looming over me.

When I returned to the rigs everyone was still laughing and giving him a hard time which forced him to be a good sport whether he wanted to be (I think he would have been lighthearted) or not. Shortly after that we began climbing back into the rigs to head out. I still felt unsure of whether this was going to end up being good or bad when all the sudden the most respected guy on the crew came running up to me with a big smile on his face. He held up his hand and said, “Hi-Five little sister! That was awesome.” At that moment I knew I would be alright and from then on the crew felt like family and I had found myself a home. 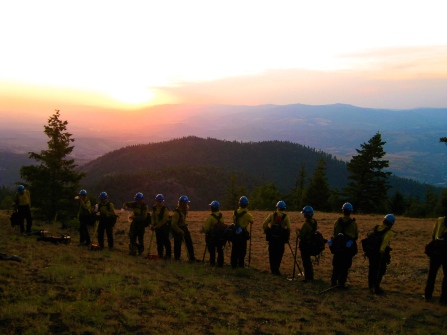 That doesn’t mean the work got any easier or that I didn’t continue fighting to stay afloat that first season, but I entered into the unspoken agreement amongst crew members. You know the one; where you inadvertently agree to work you’re a$$ off, try your hardest, and above all else have a sense of humor!

In all the years that followed the Supt and I had a running joke, it went a little something like this:

Here’s to the fire family and all the quirky ways that we build camaraderie!

View all posts by theevolvingnomad